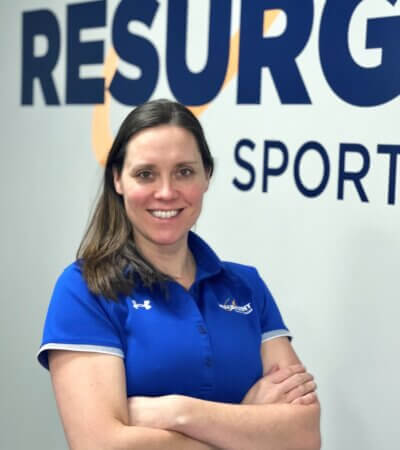 Dr. Kerri Kramer Webb spent a decade as a young athlete with an undiagnosed spinal fracture. An xray was taken 10 years later and confirmed the diagnosis but no solution was given except to “stop playing sports”. She went on to pursue physical therapy at Ithaca College in efforts to find a solution and obtained her Masters of Science in Physical Therapy in 2000. She worked in orthopedic and sports rehab for 9 years with a focus on endurance athletes and running injuries. She originally founded the Fast Track Sports Medicine & Performance Center in 2009 with a mission to provide accurate diagnostics and one-stop-shop solutions for sports injuries.

Dr. Webb went successfully completed her Doctorate in Physical Therapy in 2014 through Evidence in Motion. She has taught running analysis and rehab strategies on a national level with “Healthy Running Seminars”. She further obtained her board-certification as a Sports Certified Specialist (SCS) in 2019.

By 2019 Dr. Webb closed Fast Track and launched the area’s first Immediate Care center specializing in sports injuries, led by Doctors of Physical Therapy. This was the start of Resurgent Sports Rehab.

Kerri has also contributed to several articles in the media, including the Washington Post:

Kerri was a multisport athlete in high school playing basketball, softball, and running cross country. She continued on to play collegiate basketball for Ithaca. After graduating, she began running marathons and later transitioned to triathlons. Her athletic achievements include qualification for the Boston Marathon in 2004, completing Ironman twice in 2007 and 2011, and qualifying multiple times for USAT Halfmax National championships. She continues to compete in triathlons and has an affinity to trail running.